When Ed first decided to make wine, his first step was to research the process. Specifically, he was curious whether planting his own vineyard would make sense. Nearly every source he consulted said, “Don’t do it!” because of the tremendous amount of work involved and the many factors that can spoil a harvest. But Ed was determined to create a holistic vine-to-wine operation in which every aspect of the wine-making process could happen here at Barnello Winery. And so, the vineyard was planted in September 2013, with 150 Chardonnay vines and 250 Pinot Noir.

This vineyard, which started as 400 little bare-root clones, is now at its mature productivity stage, which means the cycle of one growing season will remain stable for as long as we maintain it (some vineyards can live to be 100 years old or more!). Each year, there are certain stages of growth that we can anticipate.

We mark the beginning of the vineyard year in late winter, when we do our primary dormant pruning. During the growing season, it’s not uncommon for vines to grow 6 feet or more. All that growth remains on the plants after harvest and over the winter as the vines are in their dormant phase. Between mid-February to early March, when the last frost is past but before the new growth starts, we do a dormant pruning in which we cut back all the previous year’s growth, down to the woody canes of each plant. We make the cuts just above the spurs that show 2-4 new buds that will grow into new vines.

As the new vines start to grow, we apply a dormant copper sulfate spray typical for most fruit trees and vines. This prevents fungus and other diseases from hurting the growing vines. We will continue to spray every 2-3 weeks throughout the summer, on a very specific spray schedule to prevent various diseases, in particular powdery mildew. This is easy in the beginning before the foliage really leafs out, but by late summer this can take 4-5 hours.

In early to mid-April, we see the swelling buds suddenly explode. The vines start growing rapidly, as much as 6-12 inches every week. When we first planted the vineyard, we adopted a cordon-style pruning strategy, which means that each cane (like the trunk of the vine) has two main perpendicular arms that grow to either side along the trellis. Now that the arms of each vine are established, we continue to prune the new vine growth vertically, so that it grows up the trellis (and incidentally, makes it easier to harvest the grape clusters later).

The growth season lasts from April to September, during which we do additional pruning as needed. The ideal vineyard is planted in straight north to south rows, but due to the slope of our field, our vineyard runs southeast to northwest. Therefore, we thin the leaves more on the east side of the vines so that the morning sun reaches the grape clusters more or less equally with the afternoon sun.

In mid to late August, we start looking for signs of veraison: the elevation of the sugar levels in the grapes that tells us harvest is near. It’s very noticeable in the Pinot Noir, because it means the grapes change from green to red. With the Chardonnay, you can tell that veraison is setting in because the grapes become slightly more translucent and softer to the touch. The timing of veraison is mostly based on how hot the summer is; a hot summer will yield an earlier veraison than a mild summer.

Our vineyard doesn’t require a lot of extra water, partly because we usually are blessed with rain all spring. During the vineyard’s first three years, we watered more frequently, but now we only irrigate 1-2 times during summer and only if it gets really hot. Most importantly, we don’t water close to harvest. We don’t want to overly hydrate grapes during this important sugar conversion stage because it will dilute the sugars that make the wine so tasty.

Those tasty sweet grapes start attracting the birds AND the bees starting around late August. We love and protect our honeybees fiercely, but wasps are not welcome and we usually put out as many as 30 traps in late spring to get ahead of them. To keep the birds out, we cover the entire vineyard with netting around September. The nets are 17’ wide, go over the vines all the way to the ground, and keep the birds out, though we have had to free a particularly clever bird or two in the past.

Once the nets are up, we’re more or less holding our breath for harvest. We take sugar readings with a refractometer every other day to measure the sugar levels of the grapes. We take a grape, squeeze a bit of juice on the lens of the refractometer, and hold it up to sun to see the grid scale of the sugar content. The ideal measurement is somewhere between 21-23 brix, which is the measure of sugar. We use the refractometer while the grapes are growing; later, as we create the wine, we use a hydrometer. The brix measurement creeps up as we worry about fire season, unseasonable rain that might cause the whole crop to mildew, freak early frosts, and any other number of diseases or pests that might wipe out the whole year’s crop.

And then, the brix is just right, and we can harvest! Usually in late September to early October, we can harvest our grapes. The Chardonnay is usually ready a week earlier than the Pinot Noir. We call in all our friends and start picking grape clusters early in the morning so Ed can get the juice processed while the grapes are still cold. Many hands make harvesting 3,000-4,000 pounds of grapes fun work, and once the juice is stable, we can all relax, with a glass of wine of course, knowing that another vineyard season has successfully ended. 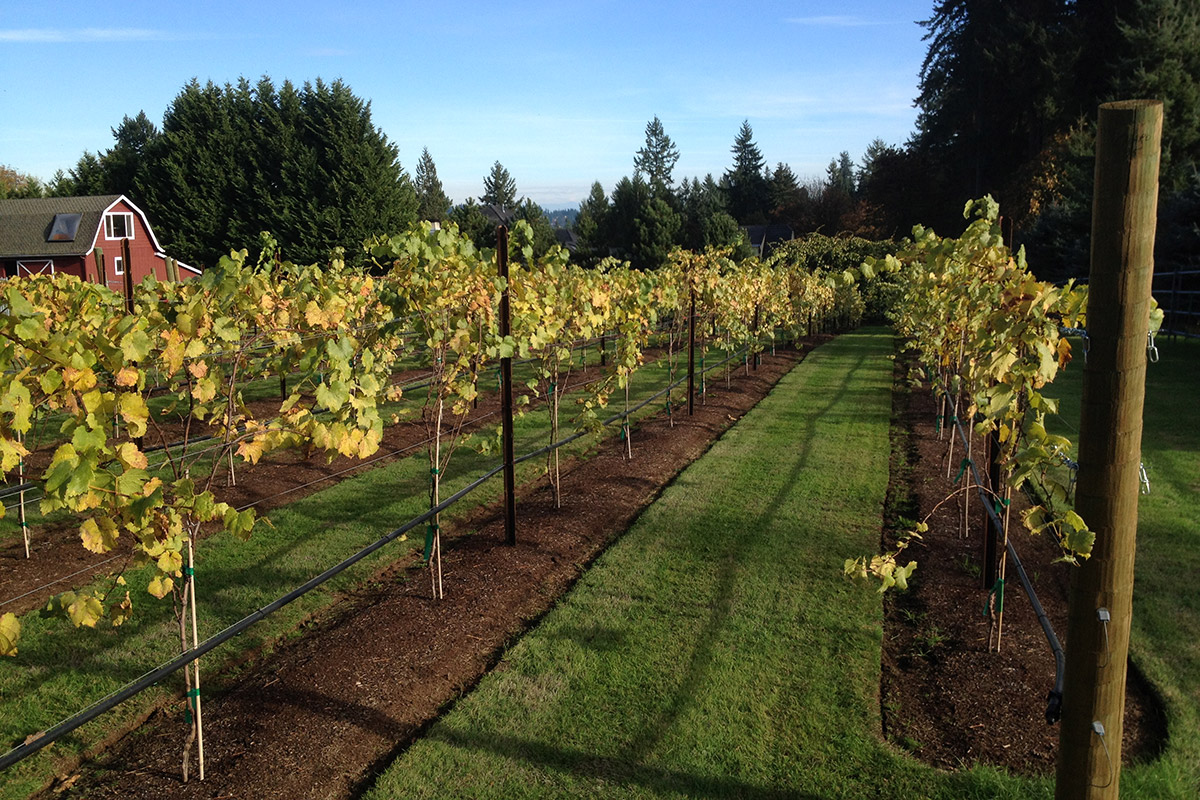 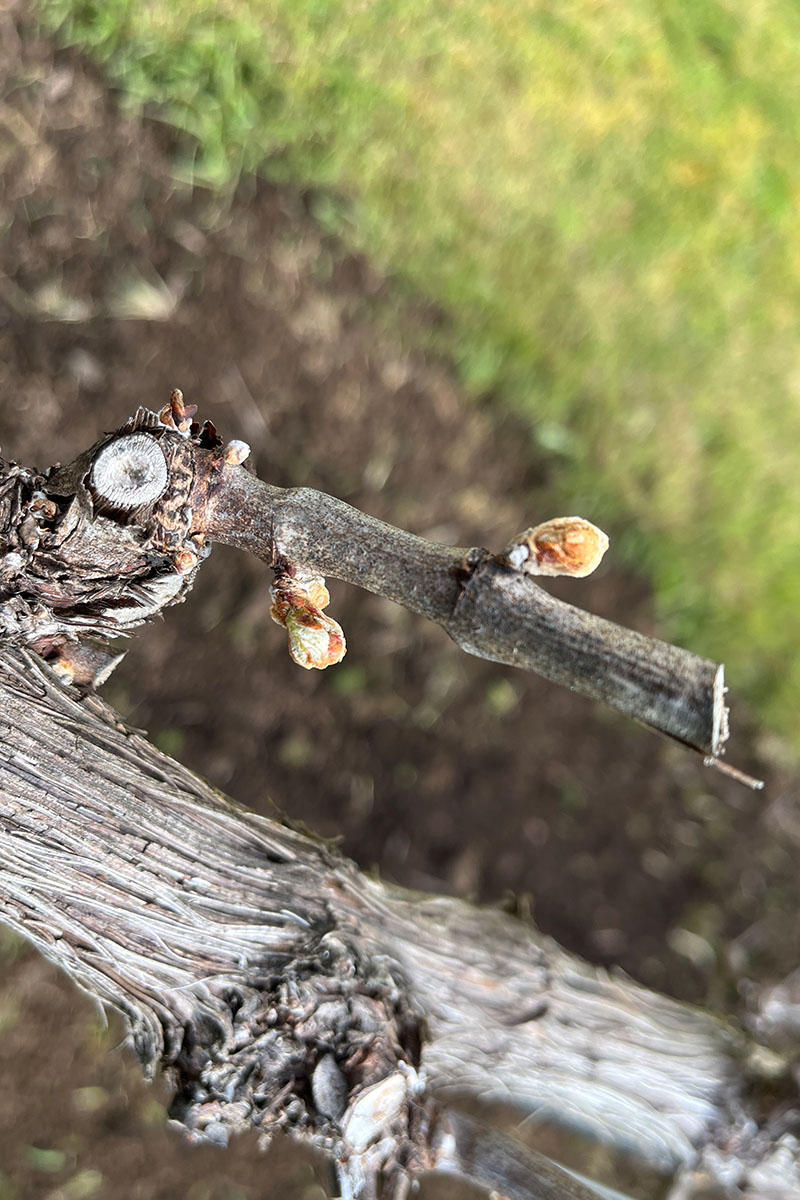 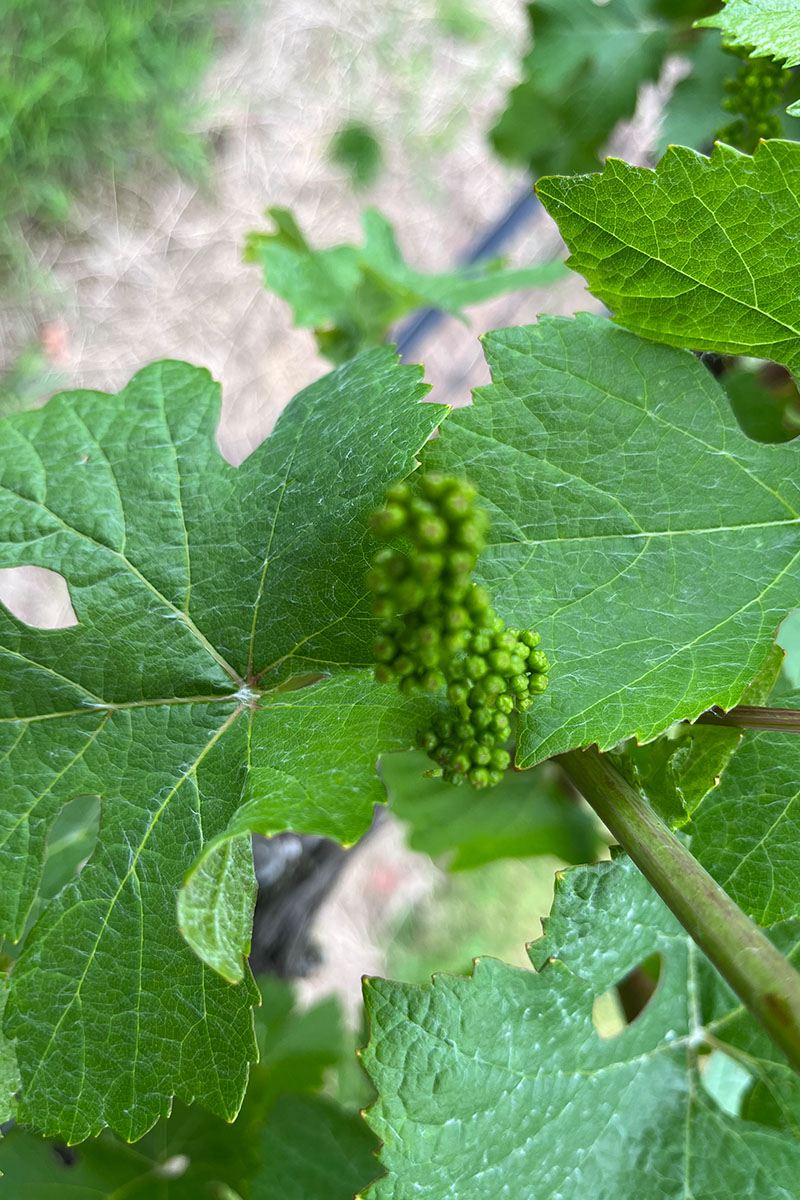 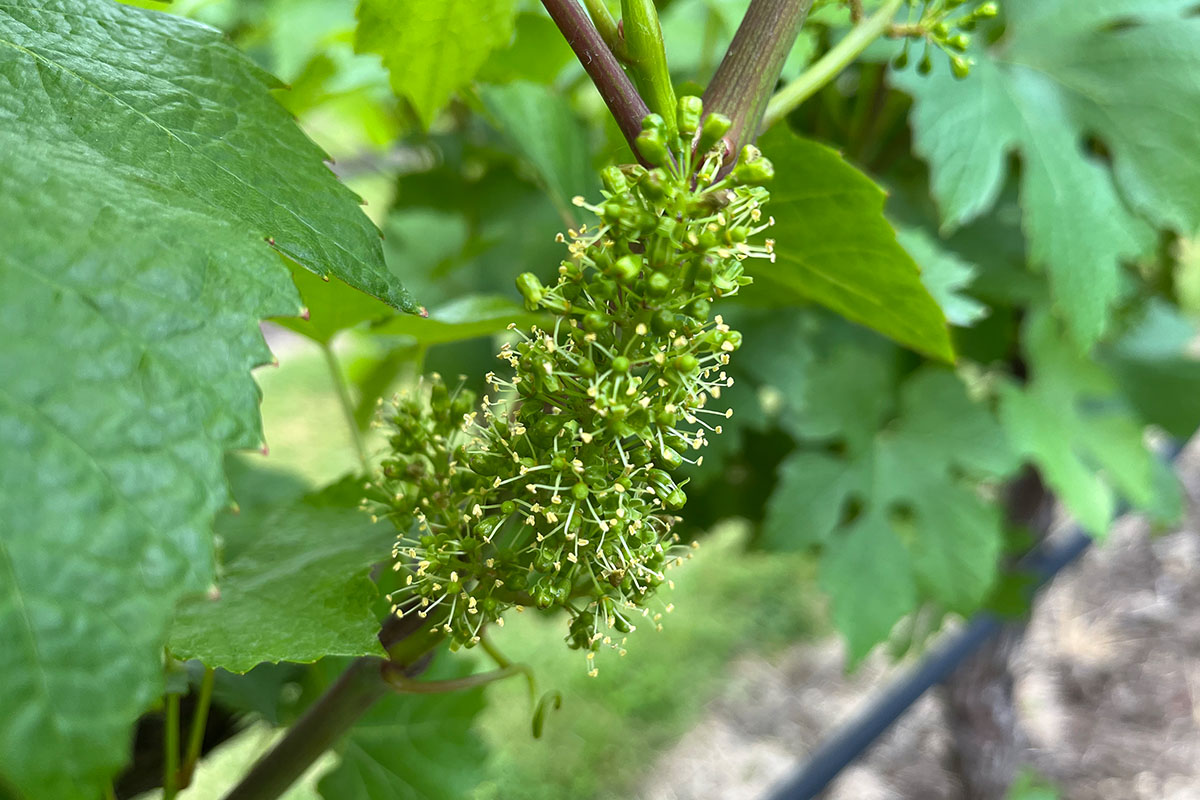