I’m sitting here with our winemaker Ed Wagner and a glass of his 2018 Pinot Noir reserve, enjoying not only the excellent flavor and company, but also the knowledge of exactly how much work it takes to get this beautiful glass in my hand.

The process of making wine begins where the vineyard’s year ends, at harvest, the beginning of a month of intense winemaking work. Harvest day is a lot of fun; we’ve had as many as 30 people with pruning shears clipping clusters of grapes into 5-gallon buckets. Our designated tractor driver drives up and down the rows picking up buckets and delivering them to Ed Wagner at the door of the winery. He weighs them and then pours them into the crusher-destemmer machine, which used to be hand-operated but is now driven by a motor-and-belt system of Ed’s own invention. This machine separates the stems from the grapes and gives them an initial crush. The juice and crushed grapes, called must, sluice down into another bucket, and when that bucket is full, it’s poured into our fermentation vats. The next step depends on whether it’s red or white wine.

For Pinot Noir and other reds, we crush and destem as above, and then let the must sit in the fermenting tanks for three days. We use a cold soak method using frozen gallon bottles, usually two frozen gallons per 30 gallons of must, to keep the must at 55 degrees and give the wine a more robust mouthfeel. Leaving the grapes to soak in their skins also yields a pretty red color.

After 3-5 days in the cold soak, we inoculate the must with starter yeast. Specific grapes require specific kinds of yeast to get started. Two days after inoculation, we start to see the bulk of the wine ferment. Fermentation is the conversion of sugar to alcohol, and as a byproduct it creates carbon dioxide, which rises to the top and creates a crust. To deflate this brew, we do a manual punchdown twice a day for 7-10 days, testing the relative sugar and alcohol levels with a hydrometer. The original 22-23% brix sugar level of the grapes converts over this 7-10 day period into alcohol. Wine is considered dry after all sugar is converted to alcohol; sweet wines retain some unfermented sugar. To predict your alcohol percentage, multiply the brix by .55 to get alcohol percentage by volume. When the wine is nearly 100% dry (meaning all the sugar has converted to alcohol), then we press the must to remove all the skins, seeds, and stems. At that point it is technically wine!

After fermentation and pressing, we transfer the brand-new wine from the vats into barrels and let all the sediment settle for a week or two, then pump out the juice from one oak barrel to another oak barrel, leaving the sediment, called the gross lees, behind to fertilize next year’s grapes. This is called racking off, and it happens several times to ensure clarity.

Then the wine stays in the barrel for months. During this whole process we’re constantly measuring three things:
pH, or acidity, which should ideally be at 3.2-3.7,
TA, or titratable acidity or total acidity, which consists of 3 acids: tartaric acid, malic acid, and citric acid. Ideally TA should be at 6.0-7.0 grams/liter,
SO2, or free sulfites. We add potassium metabisulfite when we do the crush to prevent the growth of unwanted bacteria and yeast; this is ideally at a level between 30-40 parts per million.

As a side note, there is an inverse relationship between pH and TA. The lower the pH, the higher the TA. If the pH is around 3.2, which is the low end, the acid level is probably high, up around 8, and things can be done to remedy the situation. If both pH and TA are on the high side, there’s not much you can do to fix it. If the pH is too high, the wine is not good to keep in the cellar a long time because it’s not as stable. It’s still good for a couple years, rather than 7-10 years as would otherwise be expected.

When wine is aging in an oak barrel, it has to be topped off because oxygen kills wine. We aim to minimize the amount of oxygen in the wine, whether it’s aging in an oak barrel, stainless steel tank, or glass carboy. We don’t have to worry about oxygen during fermentation because the release of carbon dioxide blows the oxygen out. In the oak barrels, there is an element of evaporation which is not an issue with stainless steel or glass. Once a month, we pull the bung, or stopper, check the wine level, then top it off with wine we’ve already bottled. Oak does create an extra step, but we feel the flavor is worth it!

We rack the wine off again after 4-5 months to filter out another layer of sediment, called the fine lees. Then we run it through a coarse filtration pad and bottle it! We bottle our Pinot Noir at the one-year mark, just before the new harvest, so that we are filtering and bottling and corking all the wine from last year so the oak barrels are cleaned and ready for the first new racking.

The Chardonnay grapes go through a slightly different process. After harvest, de-stemming, and crushing, the Chardonnay grapes need to be separated from their skins as quickly as possible. After they are crushed and destemmed we try to immediately press them. Depending on how much we have, we might let them settle on the skins for six hours, up to overnight, in a cold room and press immediately the next morning.

Chardonnay also requires heat stabilization and cold stabilization, which red wines typically do not. To stabilize our Chardonnay against heat, we use bentonite, a kind of clay, which attaches to protein ions and drops them out into a residue. We make a test sample bottle and put it in the sun for a week to make sure it doesn’t cloud up. To stabilize against cold, early in the aging process we expose the wine to cold temperatures just above freezing, which helps the potassium titrate crystals to drop out of the wine as sediment. At that point we rack it off to remove the sediment.

Chardonnay ages more quickly than red wines, so we can bottle it within 6-8 months of harvest. We age half of our chardonnay in oak barrels and half of it in glass for three months, and then combine it all in a stainless vat to finish the aging process.

Rose is made like Chardonnay except we leave it on the skins a little longer to make it pink. Rosé is simple!

The last step after bottling is to cork and label everything. And don’t forget that an expert maker of anything tests their product frequently! We hope to share a sneaky taste of the wine-in-process with you using an ingenious little glass tube called the Thief, so you can fully share in the many steps involved in wine-making. 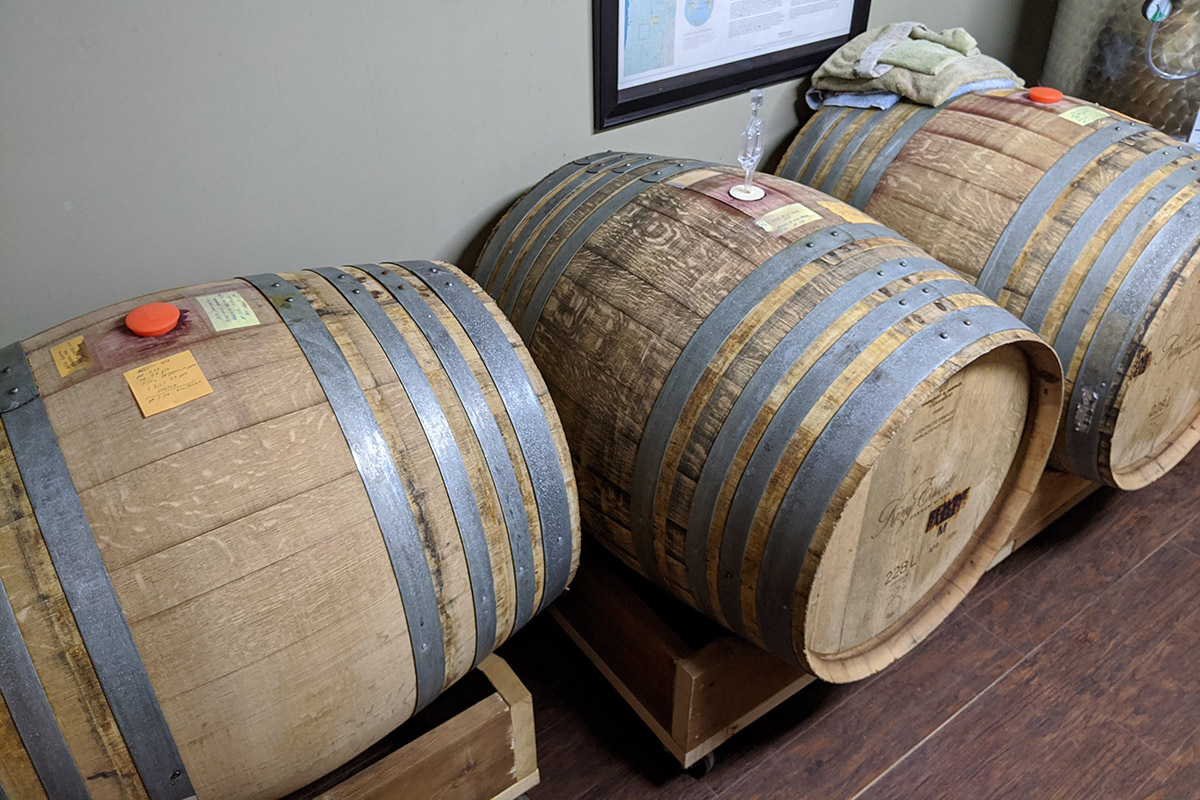 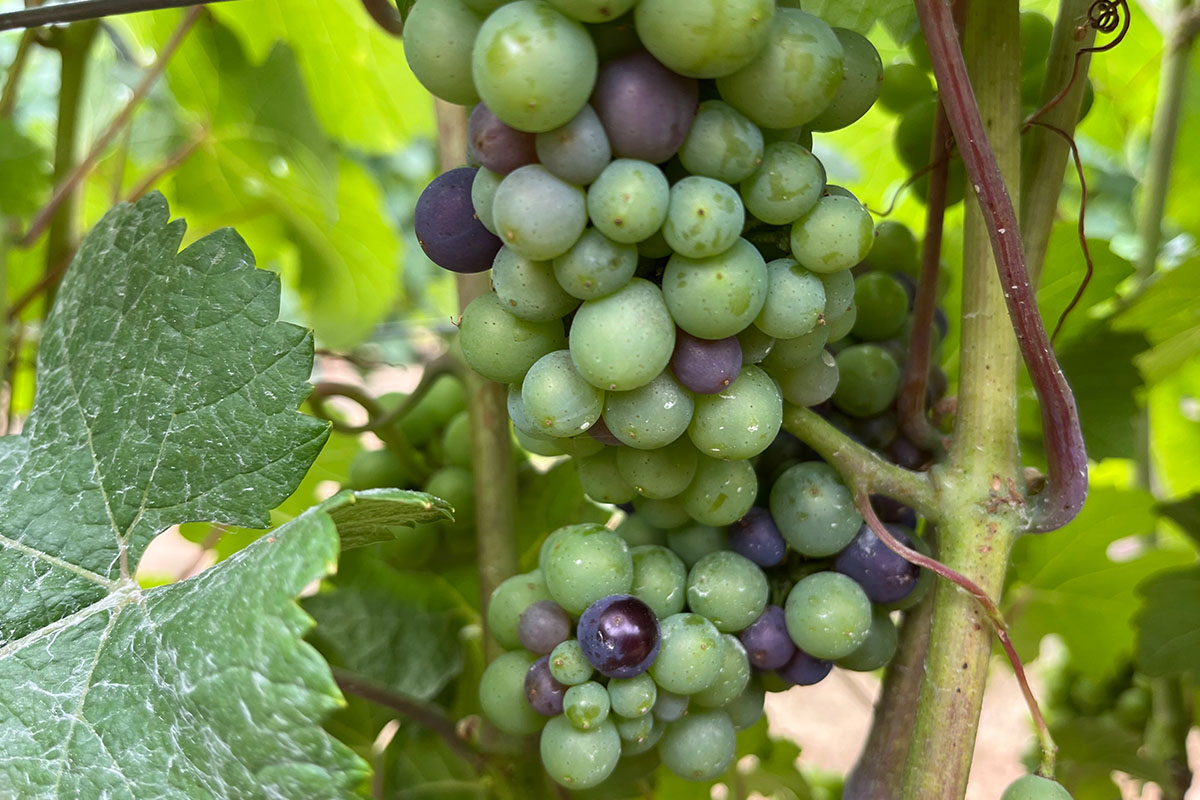